President Trump’s administration confirmed last week that Cory Louie, the White House’s chief information security officer (CISO) has been fired. The CISO is responsible for ensuring the president and his closest staff are safe from cyber attack. And, yes, that includes ensuring the security of Mr. Trump’s Twitter account.

The circumstances surrounding the departure of Cory Louie, who was appointed by President Obama, are not yet known, only that he was reportedly escorted out of his office. It is unknown whether there is a successor in place, and nothing has been confirmed by the White House.

Who will be the next target?

Louie becomes the latest Obama appointee to leave his post following Donald Trump’s election. Before his inauguration, Mr. Trump announced that he would fire all the foreign ambassadors appointed by Mr. Obama, and when he took office there was also an exodus of IT and cybersecurity staff. Gregory Touhill resigned as Federal CISO after just four months in the position, and the Federal CIO, Tony Scott, and White House IT director, David Recordon, also resigned.

Remaining staff have “targets on their back” and are afraid to speak out, according to a ZDNet source who called the actions a “witch hunt” for former Obama appointees.

As the White House CISO, Louie was charged with the security of all White House internal networks, communication devices, and data security. While the specifics of his role aren’t known, a leaked memo written by Louie and circulated among White House staff provides an indication of the position’s responsibilities. Written ahead of President Obama’s visit to Cuba last year, it gives technology guidance and security advice on the use of devices and communicating over various services.

Security could be at stake

Louie’s departure has caused much consternation for Trump detractors – particularly in light of the news that his dismissal came shortly after it emerged that Mr. Trump was still using an unsecured and outdated Android phone for his Twitter account. The tweet-happy POTUS was given a new smartphone upon his inauguration, a locked down device similar to that of his predecessor, but reportedly still uses his Samsung Galaxy to tweet.

Trump’s continued disruption of the White House’s cybersecurity program has led to “frustration and mockery alike” from security experts, who believe it makes him particularly vulnerable to hackers. While some wags have joked that, with Trump’s Twitter habits, we won’t even notice if he is hacked, the repercussions of the US President suffering a breach would be staggering.

Subscribe to the Daily Sentinel for updates on this story and all the latest cybersecurity news. 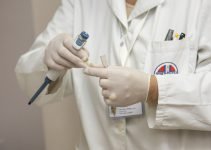